We wrapped up our first “year” of Rivendell Academy. Successfully moved up to 2nd Grade (Keaton), 1st Grade (Benjamin) and PreK (Caedmon). We celebrated with certificates and a trip Pelican’s Snoballs.

After that, we had Runner’s Camp – I volunteered at both June & July Camps, but Keaton attended only July camp (B & C went to mini camp).

Keaton participated in Javelin and placed 4th in his age group for High Jump!

Keaton also participated in the 100m Dash and 100m Hurdles! 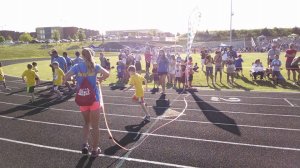 More fun is planned for the remainder of the summer — soaking up the beautiful, warm weather while we can! 😀

Such is the life with these two kids…

Yes, the Sunday school germs have invaded our home once again. Frustrated…tired…defeated – that’s how this mama feels. I’ve decided to turn into a handwashing Nazi (I thought I was bad before) we are going to be washing hands all day long from here on out…I guess we need to find a stool for Keaton to stand on b/c my back will be killing me!

Right now, they’re both asleep. One will cough and the other will mimic the others’ cough…back and forth…I’ve been hearing that for 30 some minutes now.

Please be praying for our lil guys, that this would pass quickly, no ear infections would occur, that K would be obedient in using the neb, and for my sanity as I listen to coughing (which I HATE the sound of anyways), my patience as I listen to screaming all day, my persistence in the handwashing event of the century and my teaching skills as I try to get K to cough into his elbow (haha! my 3 year olds couldn’t even do that!) and STOP touching his brother (whom he loves so so so much!)

Happy Note: a dear friend had her sweet baby yesterday! I haven’t gotten all the detail yet, but his name is Josiah, he was born around 430pm and according to their doula, mama did AWESOME!!!! Way to go J.Leigh!!!!!! SO – if you go to North Wake – call me because I’m coordinating their meals 😉

OK, I’m so excited about Keaton and his new words. He really wanted me to read a particular ABC book for him yesterday. I have the thing memorized we read it so often. Usually, I’ll read it. Then we read it again and I *TRY* to have him repeat (it’s usually, “no”) or show him a sign for the word. Well, here’s how our conversation went throughout the book. We had just finished one book (probably the X-men book, haha) and I asked, “Do you want to read another book?” (I signed book) he signed ‘book’ back and said, “Yeh.” This was his first time signing book, so I got a little too excited about it 😉 I said, “Great!! Go grab a book (sign) and we’ll read (sign) it…”

He brings back the ABC book. I open it….

Me: Apple.
Keaton: “Eh” (A sound, haha)
Me: (pointing to banana)
Keaton: Nay-nay! Nay-nay! Yummy!
Me: Cat
Keaton: Kitty, mew (first time making a cat noise!)
Me: That’s right! A kitty says meow!
Keaton: (smacking the kitty) MEW MEW
Me: Duck
Keaton: Duck! (first time saying duck!)
Me: That’s right! Duck! Quack quack!
(K looks at me like I’m stupid…moving along…)
Me: Elephant
K:….
Me: Fi…
K: FEEEEEESH FEEEEEEEEESH!!!
Me: That’s right, Fish! Grapes…
K: mmmmm (while rubbing tummy)
Me: Hearts, Ice Cream, Jelly
K: Mmmm, telly
(insert 20 seconds of me trying to get a “J” sound out…)
Me: Key
K: Tey
(again, with the “K” sound…)
Me: Lemon
K sticks out his tongue. He knows lemons. He asks for one everytime we go out to eat…and then hates it!
Me: Milk
K: (signing milk, yay!) Mi!
(Me repeating Milk over and over…)
Me: Numbers….Orange…Pig
K tries to make a snorting pig sound, as usual, but just blows air OUT his nose 😉
Me: Quilt
(apparently I’ve rubbed my arms like I’m hugging myself when I say that word, because that’s what he did, haha!)
Me: Rainbow
K: TAIN!!!!!!!!!!
Me: Almost…Stars…now (pointing to train)
K: TAIN!!!!!!!!!! TAIN!!!!!!!!!! (the boy LOVES his trains!!!)
Me: That’s right, choo choo
K: “too too” (hahahahahah, love it!)
Me: Umbrella…Vegetables…Whale
K: FEESH
Me:…Sure, fish!…Xylophone…Zebra
K points to his magnetic barn set on the door. I look at him and point the the zebra and repeat the word. He goes and points to the horse…Sure, a zebra can be a horse! 🙂

It was so much fun…we re-read the book again 😉 I won’t put you through that though!!! 🙂

B is trying to roll over, every time he gets close, K comes running through screaming and scares B flat on his back.

For the record: I’m totally content with B not rolling! (K had been since 6weeks) because little did I know at this point with K, he was up and crawling/cruising in 2 more months…yes, my lil chunky monkey, you lay there 🙂